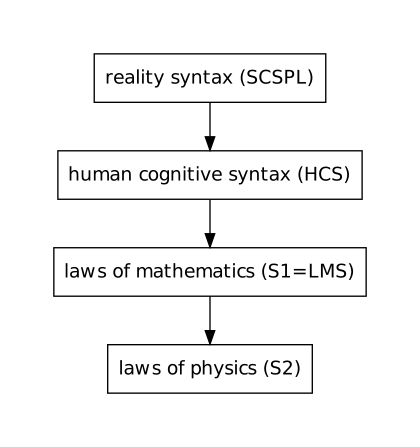 A syntactic covering is a descriptive containment of one syntax by another.

To describe something you need a language. Every language has a syntax, or set of rules it obeys. Different languages have different powers of expression, where very expressive languages are quite close in form to the things that they try to describe.

To describe some everyday physical event you can use symbols for physical concepts and objects (force, torque, sphere etc.) and arrange those symbols into some order that reflects what you perceive is going on. If you find some particularly general pattern and you describe that in symbolic terms(the syntax of your language) you have described a law of physics. You won't really be able to get very far in describing the laws of physics and physical events without the language of mathematics. Thus, mathematics provides a more expressive syntax than that of the syntax of physics; one in which you can fit all of physics AND additional mathematical material. The syntax of physics is CONTAINED within the syntax of mathematics, so it can be said that mathematics/logic provides a SYNTACTIC COVERING for physics. If you continue on in the same vein of reasoning; the overall syntax of human cognition (the language of the human mind) is more expressive than mathematics and so the Human Cognitive Syntax provides a syntactic covering for mathematics.

The CTMU asserts that the Human Cognitive Syntax is embedded in the most expressive of all languages- the SCSPL. The SCSPL provides a syntactic covering for the Human Cognitive Syntax. The SCSPL is so expressive that a description in the SCSPL of an object IS the object itself. Using SCSPL- reality creates itself and so the SCSPL is isomorphic with reality.